The Growth and Prospect of the Global Blockchain Industry

The Growth and Prospect of the Global Blockchain Industry 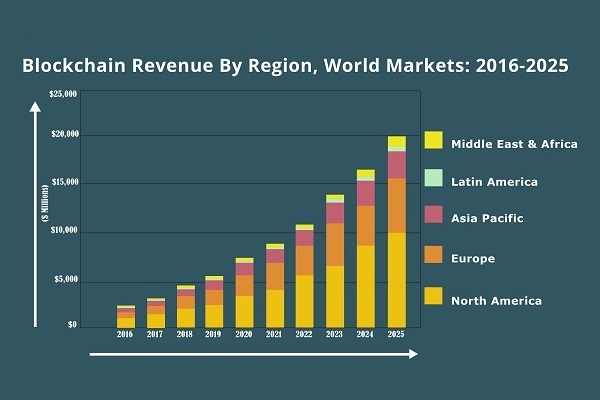 Blockchain and crypto is the new age technology that every country has been exploring in their respective ways. The technology has received overall mixed responses with some being openly accepting and some giving a lukewarm reaction. However, as per the global market report, the industry is showing promise of growth in the majority of the nations in both the public and private sectors. Here is a graphical representation of the revenue growth that one can expect in the coming years in the blockchain industry.

We will further the article with a brief review by exploring the blockchain work that is being done in each region and the market demographics. The blockchain industry in North America is all set to boom in the next few years since some of the biggest companies in the US are working with this new technology. Despite being one of the worst bear years markets in the history of crypto, 2018 saw a spending growth rate of 110 percent of blockchain in the US. According to reports, the US blockchain market is expected to see a growth of more than $37 billion by 2025 amounting to an annual growth (CAGR) of 44.5 percent per year.

A recent Forbes report stated that out of the 50 largest companies in the world that are investing in blockchain, 22 are based in North America. Apart from the industry giants, there is a significant number of blockchain start-ups that too will contribute towards the overall development of the technology. By 2025 the spending will increase from $3.12 billion to $41 billion and that is just a modest estimate at the best. The actual figures might exceed that. European countries like Malta, Estonia, Switzerland, and the UK have been the front runners in accepting crypto and blockchain creating examples for the world to follow.

From the very beginning, the UK government has been very supportive towards blockchain-related projects and they have been providing with funds as well. They have shown interest in the implementation of blockchain in the health sector and Baas or Blockchain-as-a-service is been used to keep a track on the disbursement of student loans and welfare grants. CryptoUK is the first of its kind cryptocurrency organization in the country. It is a self-regulating body that aims to make safeguard the interest of the blockchain companies and the people investing in it.

Malta has been known to be called as the Blockchain Island. They have implemented the technology in their Academic record-keeping system and are working on various likewise projects. They are a pro-cryptocurrency nation and their policy fosters development and growth of the crypto market as a whole.

Switzerland has both political as well as regulatory support for blockchain-based businesses to grow exponentially. Estonia, on the other hand, has its ambitious e-Estonia project in hand that runs the entire public service division via blockchain.

Related Posts:
Surge in Cryptocurrency Exchanges in Malta
HashCash Gears Up To Take its Blockchain Gaming Platform To The Thriving Online Games Industry In Malta When it comes to blockchain development the Asia-Pacific region has shown good potential from the very beginning.

Asia-Pacific nations have always been very welcoming towards new tech and it has been estimated that the region’s blockchain market is to grow at a rate of 87 percent in the coming few years. If we look at the countries separately:

♦ Thailand has been very accepting of crypto projects. Very recently the regulators of the country set-up licenses allowing ICOs and exchanges. They have some very distinct guidelines in place that have helped in attracting blockchain ventures. As per reports, the government of Thailand is also working on its version of digital currency for the central bank.

♦ In 2016, the Monetary Authority of Singapore or MAS a regulatory provision the role of which is to provide support to blockchain businesses in their various innovative ventures. The Central Bank of Singapore is also working with a consortium of tech companies and other banks on their Project Ubin. The aim is to facilitate the use of blockchain-based payment structure.

♦ Others like South Korea, Japan, and Hong Kong are also investing heavily in various blockchain projects. South Korea has allotted an amount of $880 million for the developmental projects related to blockchain. Hong Kong is working on ways blockchain can make the financial sector more efficient and safer.

The recent years have also seen a remarkable rise in blockchain companies that have produced many jobs in the region and continue to do so. By far Latin America has had mixed reactions when it comes to accepting blockchain technology and cryptos. We will do a quick recap of how different countries are performing in their respective blockchain sectors. Argentina has zero regulations on cryptocurrencies. SystemaD, a blockchain-based digital identity platform for financial transactions and Blockchain Federal Argentina are some of the viable works done in the country.

Brazil is showing great potential in the crypto market with many banks working together to improve their existing system by the use of blockchain.

The government of Chile is working on multiple projects to integrate blockchain technology in multiple public service areas. Chilean Ministry of Energy is all ready to start using Ethereum blockchain for tracking and recording of prices and storage of energy data.

Other countries like Colombia, Costa Rica, Mexico, Paraguay, Uruguay, and Panama have shown promise with the emergence of stable blockchain start-ups with great prospects in that sphere. The west might be the fore-runners in blockchain development but the Middle-East is catching up fast with great prospects in countries such as Bahrain, Saudi Arabia, and the UAE. The government of the UAE has already emphasized the promotion of crypto usage. The rise of blockchain startups puts the country ahead of the USA and UK in the world’s top token sale list.

Bahrain has also made some significant crypto decisions in 2019. The central banking authority of the country recently introduced an economic structure drawing influence from the digital asset domain. In another venture, the government of Bahrain started a pilot project along with UAE and Saudi Arabia. The goal is to raise awareness regarding blockchain technology and to make cross-border payments as seamless as possible between the countries.

The Saudi British Bank in a collaboration with blockchain firm Ripple is ready to launch a service that will enable instant cross-border transactions. The Saudi Arabian Monetary Authority is also using a blockchain enable remittance system with the goal of seamless transactions among several banks in UAE and the Saudi.

All these positive blockchain-related ventures are a sign that the Middle-East has great prospects in the blockchain sector from the global point of view. Since the advent of blockchain and cryptocurrency, African nations like Nigeria, South Africa, and Morocco have shown great interest in this new technology. However, the African market remains highly untapped in the blockchain and crypto zone. The biggest problem with Africa’s economic development is the ever-fluctuating national currencies.

Experts are of this view that blockchain and digital currencies can be instrumental in the overall development of the African nations. There have already been significant investments in blockchain start-ups that are working together with the government on various developmental projects. Though riddled with a lot of challenges Africa has great potential as a viable market for blockchain development and the continent too can profit a lot through such ventures. 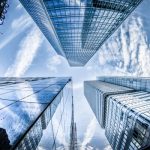 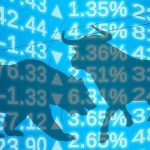